Yeah, our honeymoon was just about 9 months ago, but I told myself I would get around to documenting it before the details I care about completely leave my mind.

Today, I’ll document what I can remember from our time in Tokyo, where we spent nearly half of our time (6 of 14 days) while we were traveling in Japan.

Going into the trip, we actually had a very loose itinerary, which was probably attributed to the fact that we had been dedicating all of our extra time to planning a wedding.

Even so, it was probably a blessing in disguise, since we had a lot of flexibility and minimal pressure to be anywhere or do anything.

We arrived in Tokyo late Tuesday morning and headed straight to our Airbnb in the Shinjuku neighborhood.

After settling into our Airbnb, freshening up, and taking a much needed nap, we purchased a couple tickets to the infamous Robot Show and headed out into the night for our first Japanese meal.

This was our first exposure to Japanese restaurant culture, and though we assumed ordering food would be the same in Japan as it is in the U.S., it was nothing of the sort.

A lot of the restaurants we were coming upon had vending machines outside where customers are expected to place their orders. These particular “vending machines” (jidohanbaiki ~ 自動販売機) are the type that will then print out a ticket for you to give to your server.

We had no idea that this was how it worked, and because we were so intimidated, we ended up settling on a place that had familiar looking food (Udon noodles) and English menus.

Yeah, this wasn’t a very inspiring start for us, but our brains were so fried from all of the travel, we didn’t really have the patience to dive into the deep end quite yet.

The Robot Show followed our first meal in Japan, and even though it was probably the most touristy thing we could have possibly done, it was pretty fun.

I took full advantage of the countless photo and video opportunities that presented themselves.

Day 2 was our first full day in Tokyo, and we decided to start our exploration with a trip to a nearby coffee shop V had read good things about.

4/4 Seasons is what it was called, and you can read more about that experience here.

In short, we loved it.

It was a perfect introduction to Japanese specialty coffee culture.

After our coffee and light breakfast, we made our way out to the Minato district to have lunch with one of V’s old classmates from elementary school.

Since we had some time to kill before lunch, we walked around the neighborhood, tried some vending machine coffee, and hung out in a Kombucha bar for a quick refreshment before lunch.

V’s former classmate Matt has been living in Japan for a good chunk of his life, so it was great to get an expat’s perspective on Japan over lunch.

We had a lot of our lingering questions answered, as well as some great suggestions for things to do in Tokyo and elsewhere.

One of those suggestions was the Roppongi Hills’ Mori Tower and Mori Arts Museum.

The former has one of the best views of the city, while the latter had some interesting stuff like this makeshift orchestra from household appliances:

By meeting up with some locals on our first day, we got the inside information that Tokyo Tower is overrated in terms of city views, and that Mori Tower was the place to be.

At the top, V met three Filipino women who had married Japanese men many years earlier.

When she broke the ice using some tagalog, their excitement could not be contained.

They were able to grab a few shots of us with the Tokyo skyline (including Tokyo Tower) as a backdrop. I like the selfies best though!

In the evening, we headed to Ichiran, the popular ramen chain that serves you in individual booths, with no face-to-face interaction. 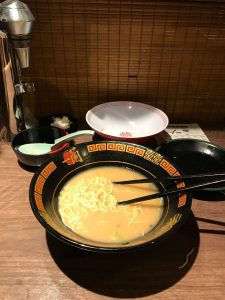 Despite a San Francisco-eque line out the door and half hour wait, it was well worth it.

Ichiran uses the same vending machine system we were totally confused about the night before, so we were forced to learn the system.

The good news is that once we figured it out, we realized it is actually a lot more efficient than having a waiter take your order.

On a mission to check out a new coffee spot every day, we opted for Blue Bottle Coffee for our morning coffee on day 3.

This was a rather disappointing decision in hindsight, because the experience felt way less authentic than it did at 4/4 Seasons the day before.

I also ordered an espresso instead of a drip coffee, and it really wasn’t much to write home about.

After a light breakfast consisting of Japanese pastries at the bakery next door, we headed to Shinjuku Gyoen National Garden, which is one of Tokyo’s largest and most popular parks.

Apparently the park is one of the best places in the city to see cherry blossoms, however, we were in Japan at the wrong time of year for this.

Regardless, there was still plenty of beautiful scenery for us to experience.

We treated ourselves to some delicious matcha soft serve ice cream on our way out of the park.

It was about time for us to check out of our Airbnb and into the Hyatt Regency, which was also located in Shinjuku.

I wrote a bit more about the hotel here, but it was definitely one of the best places we stayed (if not the best) during our honeymoon.

We spent the afternoon exploring the nearby Izakaya alley, Omoide Yokocho.

Izakayas are like casual pubs with Japanese comfort food.

We popped into our first one on the way down the alley for some tasty skewers and beers. We chose the one where we saw the most people, and we parked ourselves into the last 2 seats on the aisle, right in front of the grill. 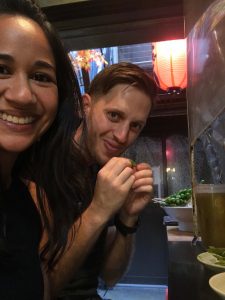 The food was delicious, and just enough to get our appetites going.

We continued down to the end of the alley to see what some of the other options were.

On our way back up, we stopped at another Izakaya for some stir-fried noodles. We were particularly intrigued with this one because it was being run by a single woman, who had to be well into her 80s.

Omoide Yokocho was one of the first times we were forced to try and communicate without English. It was arguably our first authentic Japanese experience.

The late afternoon and evening were spent indulging in the luxuries of the Hyatt, including the indoor pool and club happy hour at the top of the building.

The pool had an attendant who was literally checking the water temperature every 20 minutes. When do you ever see something like this in America?

Our “reservation” at the Ghibli Museum was set for this day, and this was the one thing we had planned to do before arriving in Japan.

I heard Tim Ferriss rave about the Ghibli Museum on his podcast, describing it as a real-life version of Alice in Wonderland, so I decided we should check it out.

I bought the tickets 3 months in advance online, but didn’t realize how high the demand to attend this museum was until after we visited.

Frankly, I was disappointed with the museum, simply because I’m neither a fan of anime nor Studio Ghibli.

This isn’t to say that I couldn’t be, but this was really my first exposure to the genre outside of a few chance encounters in my past.

The museum was PACKED with people, and I really just felt like we were in an over-saturated tourist trap.

My expectations were also probably way too high going into the experience.

I was expecting a real-life Alice in Wonderland for chrissake! Sure, it had some fun stuff to look at, but I didn’t really feel like I was in a fantasy land.

Despite the somewhat disappointing experience, we still had a good time and wrapped up our visit with some grape-flavored soft serve.

Overall, I’m sure the experience would have been phenomenal if I actually was any kind of anime fan.

When we got back to Shinjuku (the Ghibli Museum is in Mitaka), we decided to drop into Verve Coffee Roasters for some afternoon coffee.

Verve got its start in Santa Cruz, CA (our alma mater’s hometown), so we had special interest in how it compared to its locations back in the States.

The coffee was good!

I got a Japanese style iced coffee, and V got a pour over. She also bought a thermos to take home as a practical souvenir.

That night, we made plans to meet my cousin Evan (who teaches in Tokyo) at the famous Shibuya crossing.

This large intersection consists of 7 crosswalks, each on the exact same schedule. When the lights turn green, this is what happens:

Of course, this is pretty much the worst possible meeting place known to man, so we didn’t actually meet in Shibuya crossing, but instead at an overpass in the train station for a prime view of the action.

My cousin is also a pretty big guy at about 6’5″, so in Japan this is a whole lot easier to spot.

We ended up going out to eat at an Izakaya (this one, a lot larger) in the Setagaya neighborhood.

This was easily one of the best meals we had in Japan, though I can’t remember the specifics of what we ate.

Let’s just say that it was a flavorful variety of food.

My cousin was an excellent host, ordering everything for the table with his best judgment. I don’t remember him picking anything that we didn’t like, so this made things really nice for us.

The restaurant itself was also quite an experience, with the chefs shouting things at each other left and right with a good amount of theatrics in their food preparation.

This was a great ending to the first leg of our honeymoon. 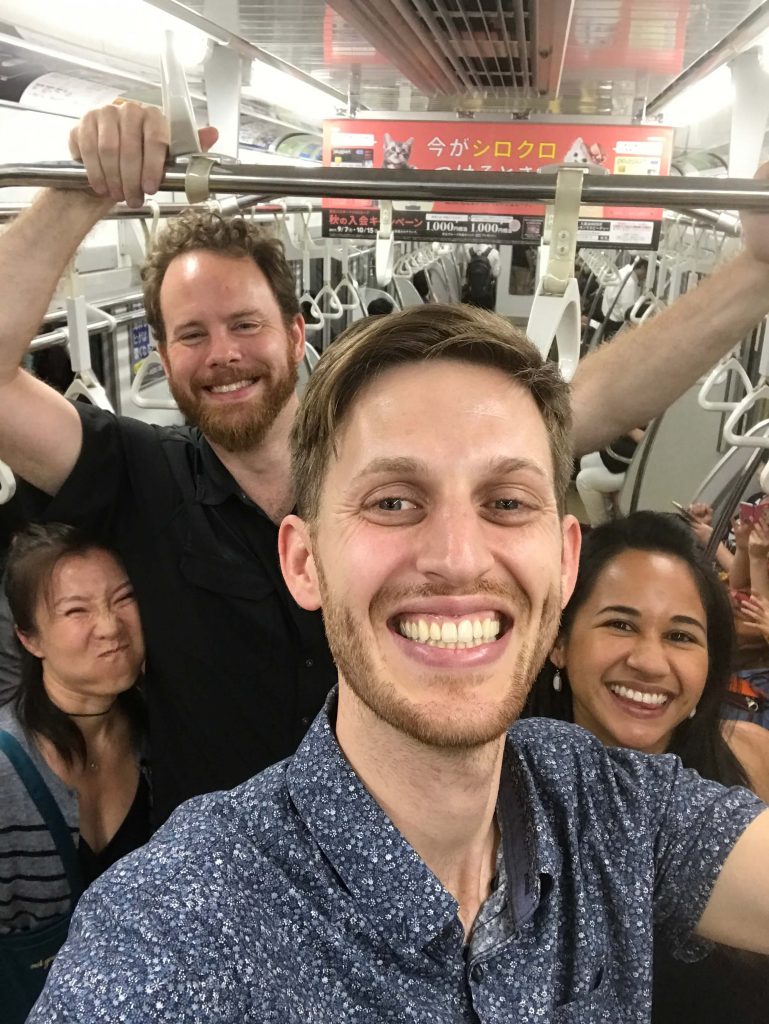 This wasn’t the last we would see of Tokyo, however. In fact, we would be back for a few days at the end of our two-week stay.

This site uses Akismet to reduce spam. Learn how your comment data is processed.